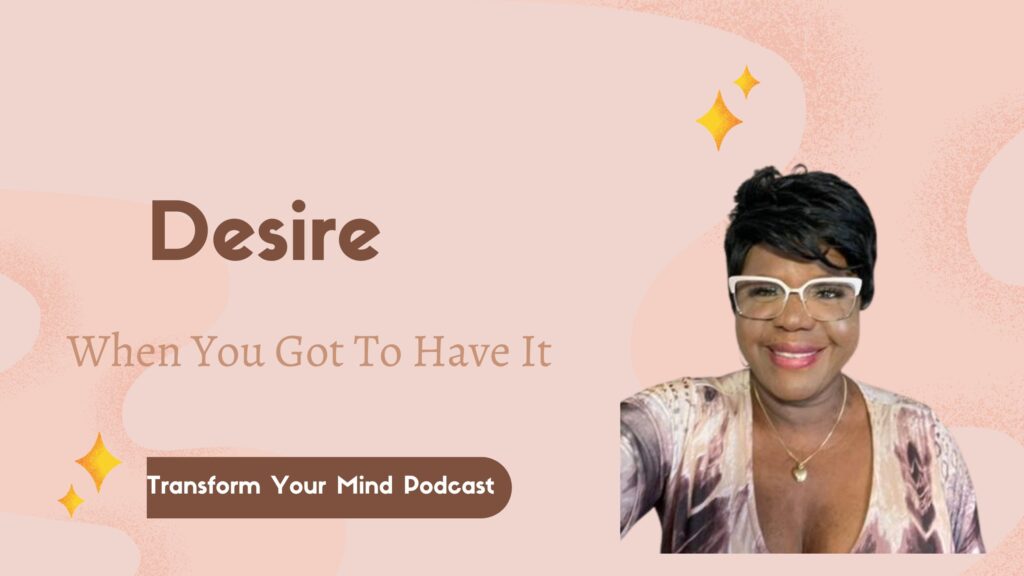 
Welcome to transformation Fridays with coach Myrna, today I want to talk on the subject of, desire – when you, got to have it.

Desire is energy, the, energy of desire, is a force that creates movement towards a desired goal or purpose. The target determines the arrow! When you, desire, something, you think about it all the time and the universe gets to work on manifesting it for you.

When we use the word, desire, we could mean either one of 2 things, the desire, for things, or the desire for sex, sexual desire.  In this episode I share tools on how to manifest your, desire for money, and other tangible things.

When you got to have it

The concept of a, burning desire, was introduced at the beginning of the book “Think and Grow Rich” by Napoleon Hill. In the book Hill tells the story of a little girl whose momma sent her to get 50 cents from her uncle. This little girl went and told her uncle my momma would like to have 50 cents. The uncle replied tell your momma I don’t have no 50 cents.

But the little girl did not leave she just waited. Minutes go by and the uncle turns around from what he has been doing and noticed the girl still standing at the door, he says go on now before I take a belt to you. Still the little girl would not leave. Finally, he walks towards her preparing to give her the belt and this little walks towards him looking him straight in the eye and yelled at the top of her lungs “my momma got to have that 50 cents”

The uncle amazed put his hand in his pocket and took out 50 cents and gave it to her.

Sylvester Stallone had to have the part of Rocky Balboa

Sylvester Stallone was broke, that’s usually how good stories start. When you hit rock bottom the only place you can go is up.

Anyway, Sylvester was broke and couldn’t afford heat in his home. One day he decided to go into the library to get warm and someone left a book on the table he was sitting on. He decided to read this book. It was a compilation of the works of Edgar Allan Poe. He devoured the book. He said that the book moved him and helped him to stop thinking about himself and to want to help other people. It made him want to become a writer.

He immediately went home and starting writing movie scripts. He wrote a few screen plays and made a few bucks. One day he happened to watch the Mohamed Ali vs Chuck Wepner fight and was inspired to write the story of Rocky Balboa about a nobody fighter given the “million to one opportunity” to challenge for the heavy weight title.  He sat down and wrote this script straight for 20 hours without taking a break.

Then he started pitching the script to producers. He was turned down by several studios until he found one that offered him $150,000 for the script, but Stallone had one condition he had to star in the film as Rocky. The studio said no way we are not going to spend millions to produce a film and place an unknown guy who talked funny to play the lead. They said no way Sylvester said, no deal.  His desire to play the Rocky was non-negotiable he had to have it.

The energy of desire will bring you what you need

They kept upping the price they went all the way up to $450,000 and he still said no. Think of that little standing girl by the door not moving until she got her 50 cents.

Stallone would not budge his, burning desire, was to play the lead as Rocky and he had to have it. Meanwhile he was so broke that he had to sell his dog for $50 and he stole his wife’s jewelry and pawned them for money.

But just like the uncle the studio finally said yes, and the rest is history. Sylvester Stallone got his goal to be a movie star because he had to have it. The film went on to make history scoring 10 Academy awards, winning best picture and triggering one of the most financially successful movie series in history. It cost Stallone $15,000 and a part in the movie for him to buy back his dog.

My own personal story was the same, my, desire, to become an American Citizen was a, burning desire. I had to have it and I didn’t take no for an answer. I applied 3 times for permanent residence and the third time which was an act of total bravery, the immigration officer said to me it looks like you really, desire, this benefit and gave it to me!  I did really want this benefit. America was my promised land, the land of milk and honey, the land of generational increase!

The energy of the desire for money

When we use the word, desire, we could mean either one of 2 things the need for things, or the desire for sex, sexual desire.

Let’s take a deep dive into both of these types of, desire.

I just finished reading the book “Think and Grow Rich” for the 5th time and the author gives us 6 steps to alchemize your, desire for money, into money in your hand.

6 steps to alchemize your desire for money

Step # 1 Name your, desire – do you want a million dollars, do you want $50,000 dollars what is the amount of money you want? It can’t be general like, I want to be rich.

Step # 2 – Select a time frame you, got to have it, by. For example, I need a million dollars in my bank account by the time I am 65 years old.

If you have ever gone on YouTube, you will see literally thousands of examples of this. Every Ad is about someone selling you a course on how they made millions, and they want to share the secrets and steps with you. That is what they are offering in exchange for money.

Step # 4 – Create a plan to get this money. Let’s say you decided you want to have a million dollars in your bank account by the time you are 65 years old, and you want to make this money by selling a course on how to start an online business. This is the stage to create the plan. How are you going to find your audience, once you define your audience, how are you going to get them to click your link to your squeeze page. How will you sell your course? Will you do a webinar or workshop? Create a plan to get this money.

Step # 5 – Write it down.  A plan in your head does nothing to alchemize, desire. Writing it down gives it form. Thoughts are formless, a plan on paper starts the wheels turning to bring it from the formless to form. That is money in your hands.

Step -# 6 See yourself having your desire. See yourself with a million dollars in your bank account. How is your life different, what are your doing, who are you do it with?  If you plan to retire at 65 see yourself relaxing, traveling the world or just sipping margaritas in your back yard with a view of the mountains.

These are the steps according to Napoleon Hill to alchemize your, desire for money.

In the book “The Alchemy of Desire by Tarun J Nepal the author says that love is not the greatest glue between 2 people. Sex is.

The book talks about the day he woke up after 15 years of marriage and no longer had a, sexual desire, for his wife.

He goes through the, alchemy of desire, what makes you, desire, someone and what happens when you no longer, desire, them.

Desire is energy. Behind every, goal, is the need to feel good! Everything you, desire, is because you think it will bring you some form of pleasure.

There are 7 major positive emotions.  Desire heads up the list.

Positive emotions enable the, Law of Attraction, to bring you like thoughts. Here is the process that starts with the, energy of desire.

Thanks for spending time with me today. I appreciate your time.  Tune in next week for another episode of, transformation Friday, with coach Myrna.  Until next time Namaste

How to Accelerate Your Soul Journey: Clear these Money Blocks