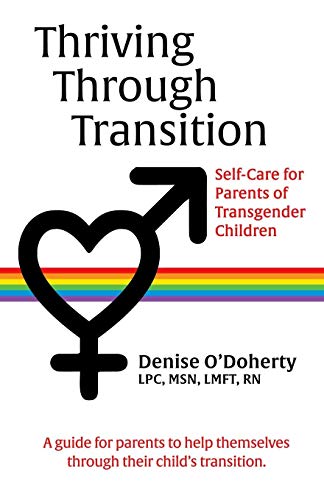 
I met my husband right after high school. We both went to college and seven years later after we finished we got married. I was so excited to tie the knot. To marry the man that I truly loved. I would joke around and tell my friends that “I met the guy from the Brady Bunch!” Because in my eyes he was perfect.

A year later after we married and I had my first child Michael and shortly after I gave birth to my two other children Alexis and Anthony. I read all those books that were given to me in my shower to educate me on what to expect in the first 12 months of expectancy and put them on my bookshelf. However, none of them prepared for some of the obstacles that lay ahead.

When my youngest was about two I noticed that he was different than my other two children. Now every child has their own unique personality, but this was different.

When his birthday or holidays would come he would ask for dolls and wigs. My other son wanted to play flag football while he wanted to join gymnastics.

At first, we would say no and he fought us until we gave in. This was who he was as a person. I knew from the moment he was a baby that he was gay. However, I put it in the back of my head because at that point I was in denial.

When he was five he was with my mother-in-law and they were in front of a wishing well. She gave him a penny and told him to make a wish and he said, “ I wish I can become a girl.”

I guess as a mother you plan this perfect little life of your children in your head or at least I did. They would grow up, meet a wonderful person of the opposite sex, get married, and have children, I would be a grandma and live happily ever after.

At the age of sixteen my son came to me and my husband and told us he was gay. We both told him that we love him and support him. But I’m not going to lie it was very hard for me to accept. I have nothing against gays. I realize it was so hard to accept because I painted this pretty picture in my head of how I wanted my children’s lives to be not realizing that it’s not my life.

Yes, I gave birth to my son. I raised him. Took care of him. I participated in all his school activities and I was there to listen to him and help him through all the obstacles he encountered. However, this is his life. I can not tell him who to love, how to dress, and how to act. Our child’s characteristics are there from the moment they are born.

This year was tough for me. I had a lot of obstacles of my own to deal with. A lot of things occurred all at once. Have you ever felt so overwhelmed with your own life that you have gotten to a point where you feel like you can’t handle it anymore? This is me right now.

Now my son is now eighteen and 2 months ago he came to me and my husband and told us that he is transgender and that he wants to become a girl. I knew it already because he started wearing girl clothes in public. He was getting artificial nails and eyelashes and the list goes on.

Being gay didn’t bother me so much, but when he told me he wanted to go on hormones and eventually change his body parts I felt like a knife went through my heart. This was my little boy. The little boy I carried in my belly for 9 months. The son I raised. The name I gave him. This was the little boy I created, loved, and raised. Maybe it’s selfish of me. Or maybe it’s my lack of knowledge.

Whatever the reason. It still upsets me so much. I don’t know how to deal with it.

I know he will never change as a person. That sensitive, loving, caring person will always be there, but I am having a very hard time accepting it.

I know it will make him happy but I am struggling to try to deal with it.

He’s 18 does he really know if this is what he really wants?

Any thoughts or suggestions?

Description of the book:

“Mom, Dad – I’m transgender” In one second our lives can change forever and that is what happens to many parents when a child “comes out” and tells them they are transgender. Even if you had a suspicion that something was “different” about your child, parents still experience a multitude of conflicting feelings about how this will affect their child, themselves, their family, and others in their lives. Whether your child is 5 or 50, most parents are not prepared to know what to say, what to do next, or how to care for themselves in the process of what is about to unfold in their lives. This book was written to make it easier for parents. To give parents insight and awareness to understand what happens to them when their child “comes out” as transgender and to give parents direction and effective suggestions on how to deal with the many issues parents commonly face with a transgender child. Issues include dealing with grief, denial, depression, anger, shame, and guilt. Knowing what to say to others and how to deal with resistance. How to deal with religious, cultural, and social issues. Most importantly, how parents can reach a level of acceptance and why this is essential for the parent. It emphasizes the importance of love and compassion deserving not only to transgender children but especially to the parents who raise them. In addition to parents, this book can educate family members, teachers, educators, clergy, counselor therapists, psychologists, psychiatrists, nurses, other related healthcare professionals, and anyone who loves a transgender person.

Fun Ways To Manage Worry So It No Longer Manages You
An Oscar-Nominated Short Film About Life, Death and Karaoke
THCB Gang Episode 100, Thursday August 4 – The Health Care Blog
Behold, the mushroom | Health Beat
6 Do’s and Don’ts of Hiring Employees